This isn’t going to be a particularly long post, it’s just going to outline an issue that has affected me recently and I’d be interested to know if it has affected anyone else or if it hasn’t what you think about it.

I live in London and I own a bike. The reason I own a bike is because it is cheaper and faster than other forms of transport over short (>5 mile) distances. This is relevant because in the past month I’ve been stopped twice by police because of how I was riding my bike, the first time I was cycling through Camden and I noticed that four cyclists on the side of the road were being given tickets by four police officers (there were two police cars parked around them). Naturally I wondered what was going on, ten minutes and half a mile later I found out. As I was cycling a police car turned on its sirens and sped in front of the cyclist who was ten or twenty metres ahead of me, as I tried to cycle round they shouted for me to stop to. It transpired that we had apparently both gone through a red light on a crossing. Now I’m not going to dispute that I did this because to be honest I don’t know if I did or didn’t. It was a crossing not on a junction, no one was on it, when I rode up to it I looked right and saw that the crossing man was red and two seconds after I went through all the cars did as well. The police officer agreed that all of this was true and that she did indeed see me go through under these conditions. However she then said that I was unlucky because that particular week was “Camden Safer Cycling” week and they were cracking down on cyclists, she then produced a fist full of fines and gave me one. I’m not complaining about her, she was polite and fair and I probably did go through when the light was red. What was unsettling about it was that instead of exercising due discretion as she normally would for such a minor event she had to give me a ticket to get rid of the pile that by policy had to be gone by the end of the week. 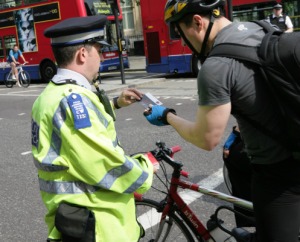 "Sorry mate but I have to give out twenty before I clock off, tell your friends yeah?"

Last night this worrying type of policing was shown on the BBC’s traffic cops program. This show follows traffic police throughout Bedfordshire (my home county) as they fine people for tinted windows, number plate font etc before showing gory pictures of traffic accidents so that we can all learn what should be obvious. Again I don’t think the police did a bad job on this program, I’ve got nothing against the officers. However at one point they revealed that Bedfordshire police have implemented a “credit” system. Under this system police officers have a quota of credits that they must reach each month, activities like handing out fines are worth a small number of credits and arresting someone awards an officer a higher amount. This to me seems nuts and here’s why, it’s not because I think there shouldn’t be a system of monitoring policing and encouraging crime fighting, it’s that a credit system doesn’t address specific crimes. What it does do is, as one officer complained on the show, take away an officers discretion. An offence that usually would get a warning (perhaps because the person is unaware of their crime e.g. tinted windows) now get’s a fine because the officer needs to rack up their credits. This one credit system is bad in my opinion. Rather than taking types of crime such as knife crime and setting a goal such as “10% reduction in a month” officers can simply supplement their credit score by tacking strings of minor and even trivial offences.

This may all seem like a personal rant, its not but it is inspired by something that happened to me. Author Charles Stross has an interesting take on this over on his blog, we all commit minor crimes now and then (often without knowing it) but as surveillance increases the opportunity for us to be caught increases.

But what do you think? Is a quota the right way to police? Have you experienced something you feel is pedantic? Leave a comment!

This entry was posted on July 15, 2011, 11:04 am and is filed under Cycling, law, London. You can follow any responses to this entry through RSS 2.0. You can leave a response, or trackback from your own site.